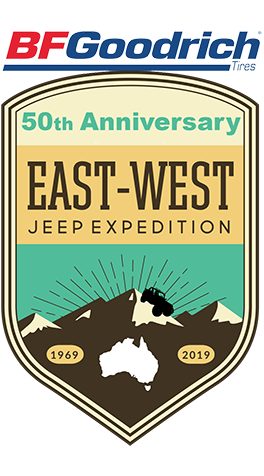 April 2019 marks the 50th Anniversary of the historic first vehicular crossing, east to west, of the Simpson Desert. The original expedition, led by Ian McDonald, was the result of a casual conversation with then Willys Motors Australia General Manager, Guy Campbell. Mr. Campbell liked the idea and saw it as a means of promoting the Brisbane designed and built Jeep Overlander. The vehicles were prepared in the Willys Brisbane factory.

There were two crossings, the first commencing on 9th April 1969 and ending back at Toowoomba on 11th May. It was a shakedown for the much longer crossing which left Byron Bay in July and traveled across the breadth of Australia, to Steep The point, Western Australia. Along with the two Jeep Overlanders used in the first crossing, they added a Jeep J300 owned by
Photographer John Eggleston. Rounding out the crew was mechanic Herb Fraser.

It would not be appropriate to allow the 50th anniversary of their endeavors to pass by without recognition. Accordingly, a meeting was arranged with the three surviving crew members, Ian McDonald, John Eggleston, and Malcolm Wilson. to discuss how a retrace of their expedition could be made a reality. To say the three “Old Adventurers” pricked up their ears at the suggestion that their historic feat may be recognized would be an understatement! They are excited to be joining us for a portion of the expedition.

East-West Australia Expedition will depart Byron Bay on 3 July 2019, and travel to Birdsville where they will enter the Simpson Desert. Following the original route toward Muncoonie and Alice Springs, they will pass through remote aboriginal lands which have been off-limits for decades. From Alice, they will veer southeast, passing Ayers Rock and into the vast expanses of Western Australia. Along the route, our video team will be fully documenting the 17-day crossing to the west coast and Sheep Point.